Specialist in General Surgery and Gastroenterology 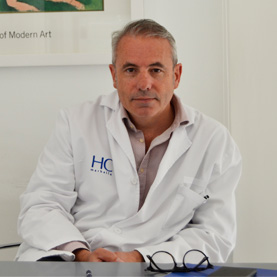 Dr. Antequera is currently a consultant surgeon at St Bernard’s Hospital in Gibraltar, where he leads the Obesity Surgery program, hepatobiliary and gastrointestinal surgery.

Dr. Antequera was an Area Specialist Surgeon at the University Hospital of Fuenlabrada (HUF). A 10-year-old hospital that pioneered the use of electronic medical records in Spain. His main interests are minimally invasive surgery and endoscopic surgery. He is also an expert in the laparoscopic and endoscopic treatment of obesity, one of the biggest global public health problems at present. He initiated and coordinated the implementation of the Bariatric Surgery project at the HUF. Other areas of specialization are gastrointestinal and hepatobiliary cancers and soft tissue sarcomas.

Between 2011 and 2013 he developed his professional activity in the United Kingdom and Ireland as a Consultant Surgeon, acquiring great experience in health management and in the management of work teams.

He made his residency via “Médico interno residente” (MIR), the intern resident doctor, at the Puerta de Hierro Clinic in Madrid when it was the National Center for Medical Surgical Research of the Spanish Social Security, the Spanish públic health care.

After obtaining his doctorate in 2004 with a thesis on organ transplantation, he has focused his research on obesity, trying to find early markers of metabolic disorders in obese patients that allow doctors to prioritize patients on the waiting list for bariatric surgery. He has been an associate professor of surgery at the European University of Madrid and Honorary professor of surgery at the Rey Juan Carlos University and Trinity College, Dublin. He is also a collaborating professor in the program of specialization in Biomedical Engineering of the Massachusetts Institute of Technology (MIT) in Madrid (M + Vision). He has numerous national and international publications, as well as lectures at congresses. He is a member of the American College of Surgeons and the Royal College of Surgeons of Ireland.

He has a great interest in Humanitarian Surgery and is a member of the management of “Fundación El Compromiso” foundation to try to bring surgical care to the poorest countries in Africa. Since then he has promoted the twinning of the Hospital of Fuenlabrada with the St Joseph Hospital in Chad, creating the project called “EnganCHADos”.